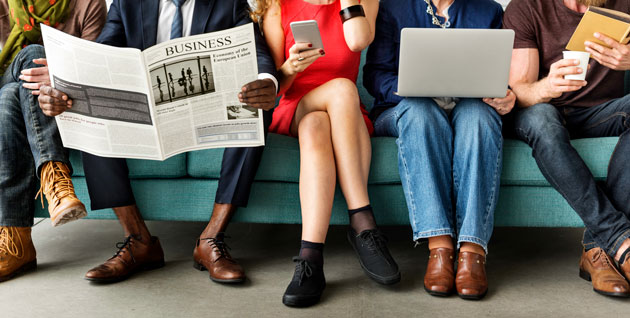 I’ve been hearing a lot lately from people who feel overwhelmed by all the drastically different news narratives fighting for their attention — especially, of course, the ones about Donald Trump.

Real news? Fake news? How do you tell the difference?

Here’s a seven-point checklist of the most essential things to know.

1. Be skeptical. There’s an old saying in journalism: “If your mother says she loves you, check it out.” Reporters are supposed to look hard at what they think they know, and so should their audience. Reputable news outlets “show their work,” so you can see how they came to their conclusions. Are the sources solid? Does the logic makes sense? (More on this below.)

2. If the story is sensational, be more skeptical. Amazing things are amazing for a reason: they don’t happen very often. There are a lot more amazing stories in the world — because they make money — than there are amazing things that actually happened. This is why serious news sources tend to be less exciting to read than tabloids are. Memorize or bookmark these fact-checking sites:

3. If the story reinforces what you already believe, be more skeptical. We all suffer from confirmation bias, the tendency to accept information that supports our beliefs, and ignore or reject information that doesn’t. If you want accurate information instead of just flattery, you’re going to have to fight your own confirmation bias. And please, don’t fall into the trap of assuming that all news you don’t like is “fake.” (More on this below, too.)

4. Check the sources. The sources of a story are like the foundation of a building: if they’re not solid, the whole thing is likely to collapse. Sources should be objective and as close to the original information as possible. So, for example, a respected, independent scientific research organization is more credible than a partisan think tank, and still more credible than a random person with an opinion.

There should be more than one source, unless the story is an interview or there is something exceptional about what this source has to say. Here’s part of the Reuters guidelines on sources, which are typical of those used by all credible news outlets:

You must source every statement in every story unless it is an established fact or is information clearly in the public domain, such as court documents or in instances when the reporter, photographer or camera operator was on the scene.

Adherence to this standard is the reason credible reporters don’t just assert things, like “Unemployment is down.” Instead, they’ll write “Unemployment has fallen to 4.7 percent, according to the U.S. Bureau of Labor Statistics.”

Beware of attempts to fool you with sources that look credible, but aren’t. These include organizations that appear to be government agencies, respected research institutions, or major news organizations, but aren’t. Look them up. While even the best sources can make mistakes, there’s usually a good reason for a good reputation.

5. Check the logic. Not only should the facts of the story be solid, so should the way they’re connected. Let’s say you hear that a person wearing sneakers has robbed a bank. Does this mean all sneaker-wearers are probably bank robbers? Of course not.

If a scientific study found that many bank robbers do wear sneakers, then we’d at least know there’s a correlation of some kind. But we still wouldn’t know that wearing sneakers means someone is likely to be a crook. It could just be that robbers like to be able to run fast. All of this would need to be checked out.

It may be easy to see the problem with jumping to conclusions about sneaker wearers, but this kind of illogic is common in less-than-credible news outlets, and often goes unchallenged by consumers. For example, because some immigrants commit crimes, many people conclude that immigrants are more dangerous, and some news outlets encourage that belief. But the logic doesn’t follow, and when we check the facts, we find that first generation immigrants commit less crime than native-born Americans do.

Now, here’s a test. Do you yourself believe that immigrants are less likely to commit crimes? Then please be aware that your own confirmation bias makes you more likely to accept what I just said, on faith. Please check — using credible, objective sources, not just the ones who always tell you what you want to hear — to see for yourself.

And the same if you still believe immigrants are more likely to be criminals: be aware that your confirmation bias makes you more likely to reject what I’m saying. Check for yourself — again, using credible, objective sources, not just the ones who always tell you what you want to hear.

Hard news. This is just the facts. For example: “A home on 13th St. suffered extensive damage last night after a 30-foot elm tree was blown over by 60 mph winds.”

Opinion. This may be an editorial, an op-ed (in newspapers, this is opinion that appears on the page opposite the editorial page), or a blog post. It’s not a problem if it’s biased — that’s what opinion means. Many good newspapers have a clear bias on their editorial pages, but give straight reporting on their news pages. Reputable opinion writers will base their arguments on verifiable facts, because opinion isn’t an excuse to make things up. You should feel confident that you can agree or disagree without worrying about being misled.

Feature story. This is softer, interpretive coverage of a story or people, exploring meaning and emotion. For example: “Frank Sinatra, holding a glass of bourbon in one hand and a cigarette in the other, stood in a dark corner of the bar between two attractive but fading blondes who sat waiting for him to say something.” That’s the opening sentence of one of the most famous feature stories of all, “Frank Sinatra Has a Cold,” by Gay Talese. Although a feature story is subjective, all facts it cites should be objectively true (unless it’s clear the writer is playing with the boundaries between fact and fiction, the way Hunter S. Thompson did, for example).

Biased, but still valid, news. Since reporters are humans, it’s impossible for any of them to be 100 percent bias free — even our story about the tree hitting the house showed more concern for the house than for the tree. But some outlets report hard news from a biased perspective. As long as they’re careful with facts and logic, such outlets can be worth consulting — especially if they challenge your own biases.

News that’s so biased it’s misleading. To support their in-house bias, some outlets twist facts and logic so much that they do more harm than good. This describes some other tabloids.

Fake news. Fake news is just made up from thin air.

7. Understand “Who benefits?” This is a technique, known by its Latin translation of cui bono, used by investigators. They find suspects by identifying who benefits from the crime.

It can help you decide whether news is real or fake.

Is the mainstream media fake news, the way we hear so often lately? No, and the charge is irresponsible, because it undermines the legitimacy of the free press, which is a foundation of democracy. What “mainstream” means is commitment to traditional standards of accuracy. Each mainstream outlet has strict ethical standards (for example, these) and will quickly discipline or fire reporters who violate them.

By far, most mainstream journalists, whatever their shortcomings, want to meet those standards. They got into the business in the first place because they wanted to discover the truth.

Even if you find that hard to believe (in my experience, it’s true), consider this: whatever their shortcomings may be, mainstream media companies benefit by getting the facts right, not wrong. Objectivity in journalism grew out of the business opportunity of selling content to all kinds of readers, conservative and liberal, many of whom make important decisions based on the accuracy of what they get from the mainstream news, and wouldn’t be happy to learn it was fake. Meanwhile, advertisers in mainstream media are there because they want to reach a large audience. They have no interest in seeing some of that audience turned off by partisan coverage.

Some less reputable media companies, though, make money a different way: by selling not facts, but sensation. They’re aiming to catch the attention of gullible people who are swayed by emotion, and they tend to attract advertisers who like that kind of customer.

Remember tip 2: If the story is sensational, be more skeptical.

So if you hear someone claim the mainstream media is fake, ask yourself, ”Who benefits from making me believe that?”

Answer: people who want to get away with stuff.

So who can you trust?

I won’t try to list all the credible news outlets (although if I did, this one would make the cut, so please come back some time).

But a good place to start is with the two most widely respected: the New York Times and the Washington Post. Neither is perfect, of course — remember: humans — but both are excellent. They originate much of the news you hear each day, they have enough reporters to cover a wide range of topics in depth, and they are home to some of the most influential opinion writers from across the political spectrum.

How do you know I’m steering you straight? You can now check for yourself — and I hope you will.

I’ll leave you with a thought from Thomas Jefferson, who, despite his own problems with the press, was one of its greatest champions:

No experiment can be more interesting than that we are now trying, and which we trust will end in establishing the fact, that man may be governed by reason and truth. Our first object should therefore be, to leave open to him all the avenues to truth. The most effectual hitherto found, is the freedom of the press. It is, therefore, the first shut up by those who fear the investigation of their actions. (Letter to Judge John Tyler Washington, June 28, 1804.)